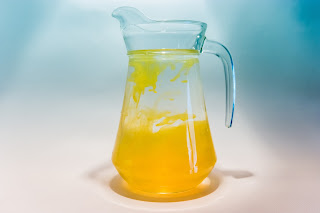 Someone came and sprinkled granules
and the water turned grapey

I was the same as I had always been
but now I was leaner, more muscular
a finely conditioned athlete
if a little anemic
I took care of that with iron capsules

I became a pacifist
a humanist
a Unitarian-Universalist

I believed that God was One
and loves everybody
and would not punish me for transgressions,
would not torment me
in Hell

Mitchell Krockmalnik Grabois has had over twelve-hundred of his poems and fictions appear in literary magazines in the U.S. and abroad, including BEAKFUL. He has been nominated for numerous prizes.  His novel, Two-Headed Dog, based on his work as a clinical psychologist in a state hospital, is available for Kindle and Nook, or as a print edition. To see more of his work, google Mitchell Krockmalnik Grabois. He lives in Denver.
Posted by Datura at 11:26