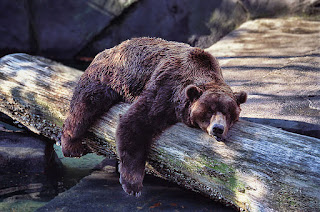 The blog and the press will go on hiatus for some time. Do not send work to neither of them, it wouldn't be considered but put to the trash directly.

Previously sent work can be submitted to another venue, I won't consider it for now.

Check later for a possible awakening.

I Am, So What Am I to Think by John Grey

thought’s about as real
as it is ephemeral –

& dreams
are all regret,
no prophecy -

tendon & muscle
are merely there
to be stilled eventually

meanwhile, the certainty of the end
can flex itself in the mirror –

I’m still impressed
with how the bones are put together,
organs stuffed where they make the most sense,
flesh packing them in,
skin stretched tight to hold it all together -

but I understand
nothing by it –

feeling the sorrow of ancestry deep within our bones

Paul Ilechko is the author of the chapbooks “Bartok in Winter” (Flutter Press) and “Graph of Life” (Finishing Line Press). His work has appeared in a variety of journals, including Juxtaprose, As It Ought To Be, Cathexis Northwest Press, Inklette and Pithead Chapel. He lives with his partner in Lambertville, NJ.

Theater of Reality and War Baby by Howie Good

Many in the audience shift uneasily in their seats as the sole surviving member of the crew describes in hyper realistic detail the dropping of the A-bomb. “Spare us your life philosophy!” a voice finally yells at the stage. German oompah-pah music starts up somewhere near me. The floor, I now notice, is littered with discarded face masks. This might not be hell, but it definitely isn’t heaven. I smile at my own wry humor. And though the smoke chokes us, and the heat of the fire scorches our eyeballs, we stay to watch victims of police brutality in their last moments.

A war ends. But what changes? The magician, after all, doesn’t actually make the card disappear. On the birthing table, the ghastly queen, legs spread apart, mind full of pus, pushes and pants and pushes again. I’m not marching, but I can hear the chants of protesters. When I go out into the street, the sky that burns at dawn bleeds at dusk. I try to seem like just a regular guy. I call it box, snatch, snapper, muff, beaver, pussy, honey pot, cooch, slit, hoo-haw, and never what it is, the rushing buzzing of everything.

Howie Good is the author of THE DEATH ROW SHUFFLE, a poetry collection forthcoming from Finishing Line Press.

But the father didn’t share this with the daughter. Instead, the father said, murmured really, of On the Road, “‘The air you can kiss.’”

Of course, K.— ’s what the father always called Kerouac, K.—was talking about warm and palmy California air. But since they lived in California, the father figured the daughter had something farther in mind. . . .

So the father said to the daughter, “You know, K. said ‘the road is life’?”

The daughter handed the father an itinerary— from Valley of Fire on Day l to Zion and Bryce on Day 2 to Kodachrome on Day 3 to Arches on Day 4  and so on, to home on Day 10.

“Why—,”  the father observed to himself, “Arches National Park?” And, as if reading the father’s mind, the daughter said, “Why—?” and the father said, “Bold, I mean,” then, “look— you put it in bold.”

With Emerson’s passion of youth that “makes all things alive and significant,” the daughter blew right past the father’s inquiry and said instead, “Awakening in a strange town. . . rocking out, . . .   not knowing what lies ahead . . . starting, breathing  . . . I mean, Dad! To get away and chase!”

“Like,” the father said simply, “wake up and live,” and the daughter said to the father with inexpressible delight, “Exactly!”

And the father thought, reflexively, “‘Dying is a wild night and a new road,’” of
of the picture the daughter said she wanted to get with her new Canon Camera with Zoom Lens at Arches’ first trembling light.

Over the years the father often hurled into the darkness the daughter’s words: “‘I just wanted to get a good picture,’” and touched the back pocket wallet that held the crisp and yellow Moab Times news clipping he never removed, but knew by heart:

“Authorities responded to the bowl area under the popular Delicate Arch around 7:30 a.m. When they arrived on the scene, they discoverd a 21-year-old woman dead from her injuries.”

“‘And the concrete word thrust among us?’” the father asked park officials, and from them, not a bit nonplussed, as if congregants well-versed with K., in a low key, “‘I just wanted to get a good picture in day’s first trembling light.’”

And with that the father appended, as if it were some totem that invoked enough, sincerely enough, heartbreakingly heartfelt enough, would bring her back, “with her new Canon Zoom Lens.”

And he still does, for that matter, of the good picture in day’s first trembling light that the daughter wanted to get with her new Canon Zoom Lens—the father does, pleads as he bleeds, so to say.

“My daughter,” goes his supplication to one deaf to the laughter of the gods, “always put clicking a shutter above clicking with people, you see. Which is to say,” he goes on, his entreaty retreating further into the cave of delusion and imagery, “she cultivated the state of being alone— she had in her imagination what she wanted to shoot, then found it. She instinctively knew, you see, the picture was not the subject, but her. In brief, a true artist, my daughter.”

Then, for his close, the prophet’s simple exhortation: “Misericordiam et judicium”
for one who lost her breath to capture a fleeting reality.

After retiring from a career teaching philosophy, Vincent Barry returned to his first love, fiction. His stories have appeared in numerous publications in the U.S. and abroad, including: The Saint Ann’s Review, The Bitchin’ Kitsch, The Broken City, Abstract: Contemporary Expressions, Kairos, Terror House, Caveat Lector, The Fem, BlogNostics, The Writing Disorder, whimperbang, The Disappointed Housewife, The Collidescope, and Anti-Heroin Chic. Barry lives in Santa Barbara, California.